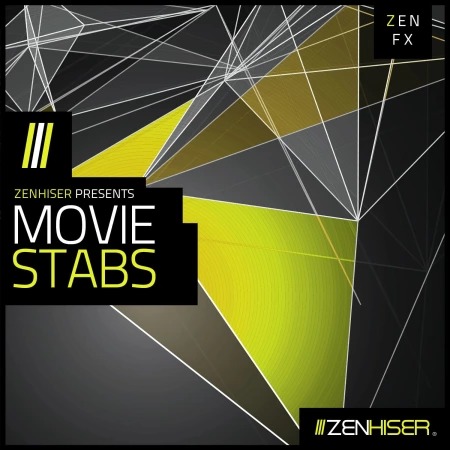 There’s no denying it, the BWAAR horn movie sound has taken over films worldwide, we love them big time, they deliver anticipation, drive, movement and an air of moodiness to films. Until now the movie stab sound was limited to major film companies and buried within the film scores. Well Zenhiser decided to do something about it and create the world’s first sample pack dedicated to only Movie stabs, nothing else. It took us months in the studio to create this pack and boy was it worth the wait, 302 perfectly created movie stabs, cinematic brass stab fx, commercial horns, blockbuster impacts, sci fi punch sounds and a whole lot more. We covered a multitude of options, genre styles and anticipation situations to offer an array of movie stab fx sounds never heard before. They cover everything from Sci Fi through to Horror movies and even an eclectic collection that would suit music productions perfectly.

Movie Stabs squeezes in at just over 1.07GB of authentic movie sounds and with a sample pack this dedicated to just movie stabs makes this fx pack an absolute winner for all types of producers, remixers, film score artists, game fx teams and everyone in between. The quality of every fx sound is second to none, we created these sounds using field recordings, hardware and software then manipulated and altered the sounds continually creating an exquisite array of movie stabs in 24 bit 96khz wav file format. There is wealth of movie fx sounds in ‘Movie Stbas’ ranging from deep, low & subby through to evolving movement stabs and the best part is they all brand new, ready to use and come with the Zenhiser seal of approval!

So if you’re looking for a huge chunk of bespoke brass horn stabs, BWAAA movie stabs, horror anticipations, blockbuster hits, space alterations, fx stabs and sci fi impact stabs then this is 100% the sample pack for you. If you think Transformers, Battleship, Inception, The Dark Knight, Prometheus & had some good stabs, think again, we’ve gone way past the blockbuster movie genre and covered anything and everything that needs a stab with the world’s first Movie Stab pack!

Please note: The preview includes drum loops, percussion, basslines and synth loops for illustrative purposes only. All movie stabs within the preview are included in the pack

All audio files within this Zenhiser pack are 24bit 96khz wav

As with all the latest Zenhiser sample packs, audio files display the bpm and key information (where applicable) within the file name

Please note: As with all Zenhiser packs, no samples are ever duplicated in our catalogue so each & every sample pack you get is fresh and new