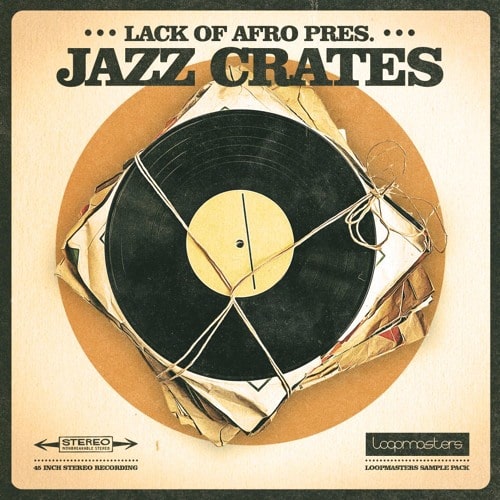 We bring you Lack of Afro Jazz Crates – modern soul-jazz slant on classic hard bop, effortlessly channelling the spirit of the golden Blue Note era of jazz. All content is 100% Royalty Free and delivered with the passion, pride and high performance you’d expect from lack of Afro and his accomplices.

Lack of Afro Jazz Crates is performed by The Jazz Defenders; a group born out of a deep love for Blue Note Records – specifically the hard bop recordings of Horace Silver, Hank Mobley, Lee Morgan and Art Blakey. They’ve worked with a variety of internationally acclaimed artists such as Nigel Kennedy, Massive Attack, Pee Wee Ellis, Andy Sheppard, Get The Blessing, Simon Spillet, Alan Barnes, Rodriguez & Nostalgia 77, as well as playing at venues including Ronnie Scott’s, The Jazz Cafe & The 606 Club.

Jazz Crates comprises of 1.19GB of content with 240 Loops bursting with incredible musicianship combined and the engineering skills of Rudy Van Gelder. You’ll find these sounds authentic to the ancient ritual of crate-digging – Do not expect clean individual stems here, due to the authentic live recording with all musicians in one room there is bleed and background noises on some samples but don’t be put off as this only serves to add that “lifted off a record” feel. Jazz Crates has a faithful selection of Jazz instruments including Live Drums, Upright Piano, Fender Rhodes, Tenor Sax, Trumpet, Upright Bass and more – to entice and delight your ears!

Six tracks are featured here, at tempos from 95-136BPM – and in a range of musical keys. These sessions were recorded, mixed and delivered in one take, resulting in a richly textured selection of sounds, delivering you samples with depth and character.

Lack of Afro Jazz Crates is a live selection of Jazz sounds to bring vibes and grooves to your music. Log in to download a free taster pack, and check out the demo tracks to find out more.

Musicians featured on this collection

Note-The Demo song has been created and blended using the finished song masters so some content may not be found isolated within the loops.