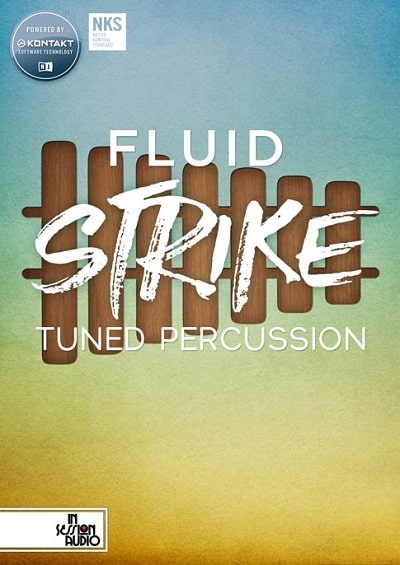 Why tuned percussion? Because the instruments are timeless.

Wood, steel, stone, bamboo, glass and gourds combine to make a sound that is elemental. A sound that can harken to both the past and the future.

With a slew of effects, sound shaping tools and autoplay rhythmic and melodic features at your fingertips, Fluid Strike allows tuned percussion to sound completely unique.

WE’VE GONE THE EXTRA MILE We didn’t stop at sampling each instrument just once.
Where possible, each instrument has been recorded using a variety of sticks, mallets, fingers, brushes and bows.
For example, the vibraphone is offered played with soft mallets open and muted, rubber mallets open and muted and bowed! Choose what you need.
Between the 30 instruments recorded for Fluid Strike, there are 63 different sample sets!
You can find a complete list below the instrument images.

Disclosure: The mbiras, tingkliks and the Brazilian tongue drum were previously featured in products by Nine Volt Audio. However, they have been re-mastered and re-mapped for Fluid Strike.

The idea had been rattling in our heads for a while. Years actually.

What if we could create an instrument that allowed the user to:

With nearly six months of development, we did it! We look forward to putting it in your hands.

The Triple Play engine supports up to 22 user-selected Kontakt effects at once, plus an additoinal three filters, three send delays and three send reverbs, for a total of 31 (!) simultaneous effects.

Fluid Strike runs in Kontakt or the free Kontakt Player 5.6.8 or higher (requires a minimum of Windows 7 or Mac OS 10.10).