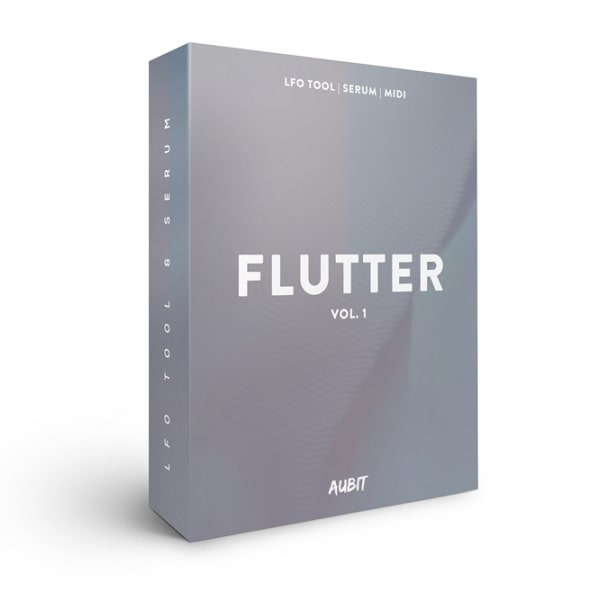 Flutter Vol. 1 allows you to jump straight into making the music you’ve always wanted to, cutting out 100s of hours of fine-tuning producer mouse-work. Producing intricate Future Bass drops has never been simpler, just pick a chord patch, add one of the [FLUTTER] LFO Tool presets, and you’re golden.

Producers like Illenium, Flume, ODESZA and Porter Robinson use techniques such as modulation, filters and automation to create what we call the ‘Flutter’ effect: chops, runs, slides… *flutters. Within the 50 LFO Tool presets we made for Flutter: not only are there [FLUTTER] presets, we also made some [CHOPP] presets for adding more rhythm, and [GLITCH FX] presets for pre-drop tension and transition energy.

The flutter effect sounds great on sustained sounds like leads, chords and keys, which is why we’re including 192 of our favourite pre-released leads, chords, keys and bass presets for Serum, from packs like Awake, Louv, Gray, Plume, ODESSA and more. (192 presets in total).

Finally we included 50 of our favourite MIDI loops from packs like Awake Vol. 1, ODESSA Vol. 3 and Louv Vol. 1 – as well as 3 killer bonus MIDI files. The combination of Serum presets, MIDI loops, and now Flutter LFO Tool presets, is everything you need to create the best music you’ve ever made.

Get Flutter Vol. 1 today and start creating the drops you always wanted to.

**Please note: Drums, vocals and guitars from the demo songs are not included.

P.S. – Our favourite LFO Tool preset in this pack is called ‘[FLUTTER] Takeaway 1’ – go check it out 🙂