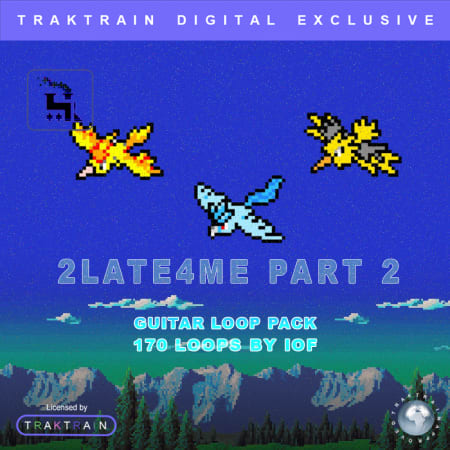 IOF presents the long-awaited sequel to the best-selling “2Late4Me” Guitar Loop Kit on theStore! It contains 170 audio files of live-recorded guitar, with 52 directories that have several loops which can be used together on top of each other. Additionally, the author included a mixed preview of all of the samples for each folder.

Certainly, those loops will find a way in any Emo Rap, New School, or Trap beat very easily. Some of the inspirations for the sound of the loops include Smrtdeath, Ghostmane, and Lil Peep records. So this kit is the perfect addition to any producer’s library, providing a strong blueprint for producing top-quality beats similar to producers such as Smokeasac and Fish Narc.

This kit is the continuation and the expansion of the first “2Late4Me” guitar pack. So it has the same idea of providing the producers with a supply of modern-sounding guitar loops. But this time the creator returned with much more brand new material. However, this doesn’t mean that the quality has decreased – on the contrary, the samples sound crisp and tight. In addition, all the loops are played with technique and feel that amplify emotional writing. The selection of music genres that influenced the kit’s contents spans from Funk and Soul to the Blackest of Metal. Enjoy the airy arpeggios, thick chords, tasty riffs, intricate melodies, and deep, harrowing basslines.

A Greek producer, IOF has been a regular aroundfor some time now. Through years of practicing and honing his craft, IOF has become a prominent guitar player in the small-knit community of emo trap.